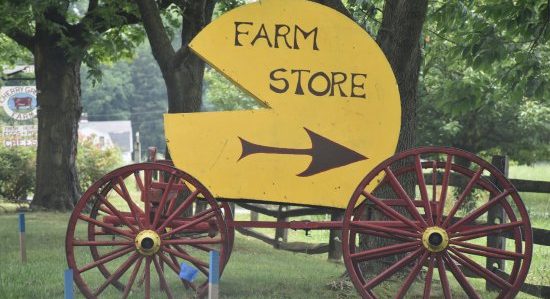 Now that I know the meaning of the French word that so many artisanal spots in Central New Jersey are using, I’ve become obsessed with finding the Terroir’ (pronounced tare-wah), or the taste of place of the Garden State.

What is the unique flavor of the chocolate, cheese, wine and food created on the farms and towns nestled in Central New Jersey’s Canal Region?

I’m beginning my investigation with local cheeses, made by two organic dairies, Cherry Grove Farm and the Bobolink Dairy & Bakehouse. Two dairies, two approaches to cheese-making and regenerative agriculture, and lots of unbelievably mouth-watering local cheese.  I’ve added some friends, a few day trips, and some locally made goodies to create the perfect way to understand what kind of tastes Central Jersey produces.

It’s been a long week and I’m looking forward to a picnic at Cherry Grove Farm in Lawrenceville, N.J.  Kathy Simon, the marketing manager for Cherry Grove, said she loves it when people buy cheese and wine at their farm store and picnic in their gardens. So, that is exactly what we are planning to do.

We turn off the well-traveled Route 206 and immediately enter another zone.  It’s calm and green here with a hint of Autumn in the breeze. 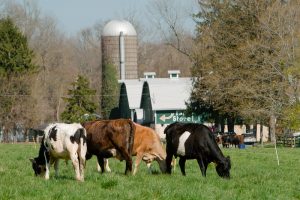 As we enter the store, we realize this picnic will include much more than cheese. The farm store features more than 20 lovingly chosen New Jersey products from chutneys to chocolates, hand loomed wool socks to CBD hand lotion. So, this may take a while.

We hover over Cherry Grove Farm’s cheeses and choose Gouda, Havilah and Herdsman. Then we branch out and buy a gently tart Tomato and White Sultana (raisin) Chutney made right here in Lawrenceville, and a creamy smooth apple butter made in nearby Trenton.  For sweetness, we indulge in lemon ginger shortbread cookies from Bucks County, PA and a beautiful box of caramels made in Haddon Township. Each caramel is topped with a seasoned salt in flavors such as Smoked Habanero, Thai Ginger, Spanish Rosemary and Alder wood.

We definitely need something to put in our cups, so we buy a half bottle of Revolutionary Red a lovely little wine grown, produced and bottled at Unionville Vineyards in Ringoes, New Jersey.  The scene is set.  We place our brightly colored cloth on the picnic table and lay out our stash…cheese first! 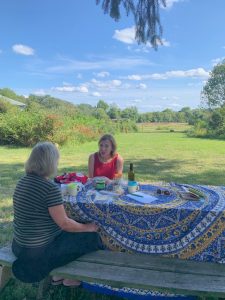 The author’s friends enjoy a picnic at Cherry Grove Farm.

Cheese that packs a “wow”

“Wow! I haven’t tasted cheese this good since I was in Europe,” said my well-traveled friend Pat as she piled light yellow hunks of Gouda on the cranberry walnut bread from the farm store.  We watch the cows wander by for their afternoon milking as the farm’s beauty settles over us.

The 400 acres of Cherry Grove’s land is home to a farmhouse, barns, a farm store and cheese making facility, as well as pastureland for their dairy cows, pigs, chickens and a few beef cattle, all raised without antibiotics or hormones. In addition to raw milk cheese they sell meats and eggs as well as other locally made products.

The farm has been in operation since 1904 when it was purchased by the Hamill Family, whose grandchildren still own the property. The farm’s two cheese makers create small-batch cheese using the milk from 30 cows that graze on the farm’s certified organic pastures.

“I love the look on people’s faces when they taste our cheese for the first time. You see their eyes fly open in amazement because they are used to store-bought cheese,” says Paul Lawler, Head Cheesemaker at Cherry Grove.

While Paul says he likes all the cheese they make, his favorite is the Havilah which he has spent the last five years perfecting for consistency and taste.

Lawler said he never intended to make cheese. He graduated from college with a degree in sculpture and graphic design and was on the path to become an arts librarian when he took a part time job at Di Bruno Brothers Cheese in Philly to make some extra money for travel.

“My life was totally interrupted by cheese,” he says. After that first job in Philadelphia, Lawler visited cheese makers in Italy and the United States and, apprenticed in the states and now, aside from gardening, he lives and breathes cheese.

He says he loves his work because it mixes science, problem solving and creativity and is “endlessly challenging.” I ask about the Terroir of his cheese and he explains that they make certain cheeses seasonally when the cows are out grazing. In early spring, the cheese may have delicate hints of onion grass, red clover and alfalfa.

These subtle flavors that make their cheeses unique are recorded on a white board by staff every Tuesday outside the cheese room. In the Havilah, for instance, Lawler says he has tasted pineapple, brown butter, caramel, toffee and a spectrum of sweet and savory. He adds that each cheese has so many textures and layers that the longer you chew the more you taste.

One recent taste innovation Lawler is testing is a whisky wash. He bathes their Trilby cheese with Dad’s Hat Whiskey from Bristol, Pa and produces what he says is a sweeter cheese than usual.

While Havilah, Herdsman, Buttercup Brie and Toma are a few mainstays of Cherry Grove Farm, Frolic, Amram, Baudolino and Amish Blue cheeses are some of the favorites made by a neighboring cheese maker Bobolink Dairy in Milford, New Jersey.

At Bobolink, the farmhouse and store sit at the base of a hill with pastures top to bottom. The drive through the heart of Central Jersey to get there is as bucolic as the farm itself. 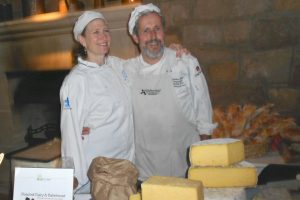 Owned by Nina and Johnathan White, Bobolink makes 100 percent grass fed raw cow’s milk cheese and butter as well as wood fired breads and pastries made with heirloom grains. They also sell their meats and charcuterie. While you can’t picnic on the property, you can journey over to nearby Frenchtown or Milford with your cheese and bread and find a lovely spot to picnic by the river.

Bobolink does offer tours of their property and hosts special events such as a recent Gypsy Jazz gathering that featured mint iced tea, pork sandwiches, corn on the cob and cookies. The grounds were filled with blankets occupied by families and long tables under a big tent filled with weekend wanderers like myself.

As jazz played lightly in the background the farm filled up with people.

“We are always looking for something that gets us out of an urban environment and this feels like a family picnic,” said Jean Carne a retired teacher from Middlesex County, New Jersey.  Her husband Tom added, “We came to breathe the air, eat some cheese and dig the gypsy jazz.”

Farming that Heals the Earth

While cheese-making is their passion and craft, educating others about sustainable and regenerative farming practices that heal the earth and honor the animal is their mission. Their cows are fed no grain and they pasture outside all year. The White’s believe that keeping their cows outside is not only good for the animal but excellent for the soil’s regeneration.

“We can’t choose to destroy our environment to make money. Our products effect on the environment takes a priority for us,” says Ms. White. 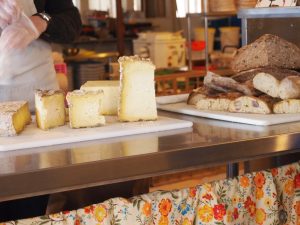 It appears their environmental mission only enhances the taste of their cheese.  Their Amram Cheese won a silver at the Cheese Awards in Lyon, France in 2018 competing against cheesemakers from around the world. And, according to one local admirer, the cheese produced from the Bobolink cows has an unpredictably wild Terroir which might be the closest to New Jersey’s Terroir that cheese gets.

On a recent Sunday at the busy West Windsor Farmer’s Market, located at the Princeton Junction train station, one of Bobolink’s employees, or as he prefers “microbe aficionado” Ryan Bender, was selling cheese, lots of cheese.

He explained to curious newcomers and well-established regulars the differences between the taste with a comedian’s timing. He begins with the mild Frolic which he deems ‘Easy Street’ then moves to ‘Funky Town’ or ‘Tractor Trailer cheddar which is tough and strong’ then onto ‘Big Funky – lived in a shoe for a week.’ Shoppers are undeterred by the titles as they taste each one and proclaim their favorites.

One woman bought a pound after tasting the mild Frolic – half for her neighbor. The next man in line was more seasoned asking specifically for a Rosemary EPI.  This is a beautiful braided bread that looks like a sheaf of wheat.

As he left he said, “It’s fun to eat and I haven’t found anything like it outside of New York City.”

Another customer purchased a hockey puck sized round of Amram and Mr. Bender recommended they eat it with rye bread and a wine with oaky notes.

“We’re just going to eat it in the car on the way home,” they replied as they drifted away laughing.

Back at Cherry Grove Farm our picnic is winding down. The conversation with my friends has been as fluid as always moving from family to our favorite podcasts, to what it means to be part of a community today.  Is it Instagram? Religion?

We are silent for a minute. I think about the farm and all the artisans and farmers I know in Central Jersey who are living out their mission to be good to the land and to grow and create food with intention.

I realize this moment is what community and place are all about. It’s sitting with two dear friends eating and drinking only local foods and wine and watching the cows meander past on their way back from milking. The very same cows whose milk went into making the cheese on our plate.  This is my taste of place right here at this picnic table on this lovely farm.

Diane M. Landis, Founding Executive Director of Sustainable Princeton and a Founder of Princeton School Gardens Cooperative, is a food and agriculture writer in Central Jersey.