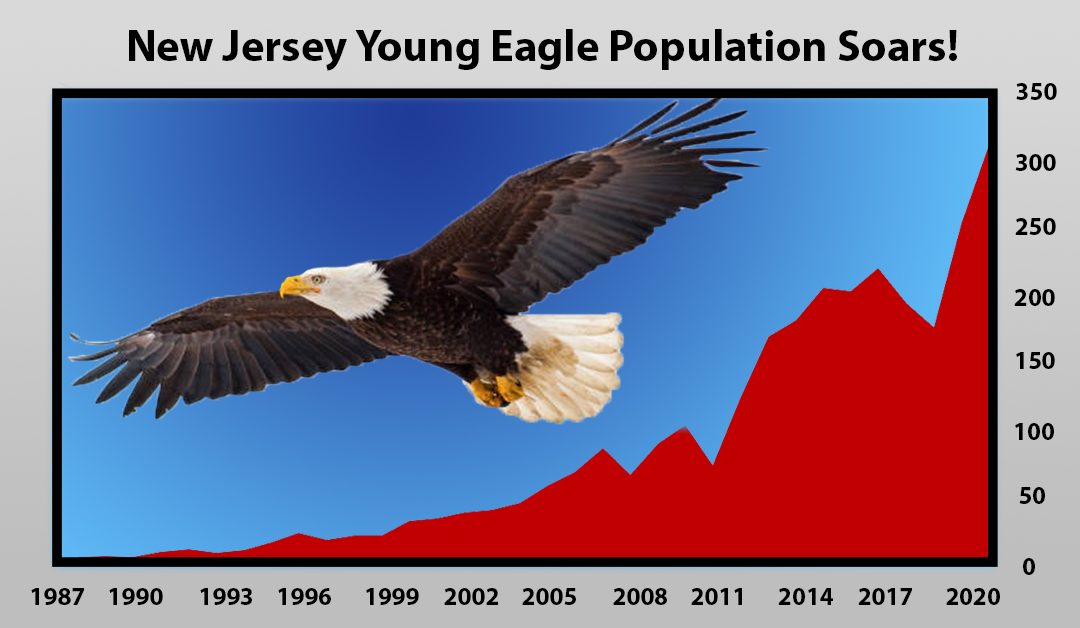 New Jersey’s bald eagles produced a record 307 offspring in 2020, a remarkable 23% increase over the prior year. Even more impressive is the long-term trend, as eagles have made a stunning recovery in the Garden State.

For most of the 1980s and 1990s, there was just one nesting pair of eagles in New Jersey, a legacy of dangerous agricultural pesticides and habitat encroachment.  In recent decades, environmental regulations and a determined effort by New Jersey regulators, advocates, and volunteers have helped make eagle sightings almost routine. New data from the New Jersey Department of Environmental Protection Division of Fish and Wildlife shows 2020 was by far the best year in a lifetime for eagles, despite the pandemic that plagued humans. 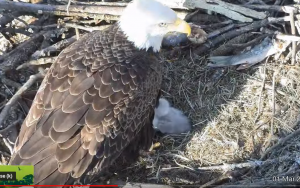 Central Jersey is home to twenty nesting pairs, including the most famous of them all—the YOUTUBE STREAMING eagles of Duke Farms in Hillsborough, NJ. Their Real Eagles of New Jersey reality show can be watched anytime of day or night. The most dramatic video clips have attracted tens of thousands of views, including a one-sided fight between a Duke Farms eagle and a FOOLISH, SMALLER HAWK that paid a steep price for an unauthorized nest visit.

The Duke Farms YouTube Channel is the best and safest way to watch these eagles, but a  visit to the gorgeous pathways and stone bridges of the former Duke Estate will give you a chance to see eagles with you own eyes, soaring in the sky or perched on a high tree branch. 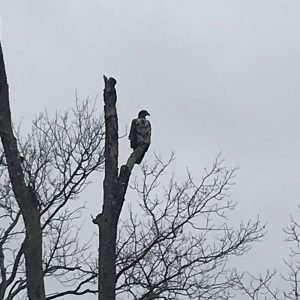 Seen at D&R Canal State Park near Princeton, this immature eagle has not yet developed a white head and tail.

The Discover Central New Jersey GUIDE TO RECREATION AREAS describes Duke Farms and several other places near eagle nests, including the Watershed Institute and the 70-mile long D&R Canal State Park that passes by eagle nests at Bordentown, Trenton, Princeton, Manville, and Bull’s Island.  Focus your attention on the skies and tree branches above waterways where eagles hunt.

Importantly, do not attempt to approach an eagle nest because of a serious risk of spooking the birds and causing them to abandon their nest. It may take you many trips before you get lucky enough to see an eagle on the move.

In January and February, female eagles are laying eggs that will require constant attention.  Interestingly, both sexes are equally involved in tending to the nest, sitting on the eggs, and raising young eaglets once they start hatching in March. They also share hunting duties equally, with the females slightly larger and stronger than the males. 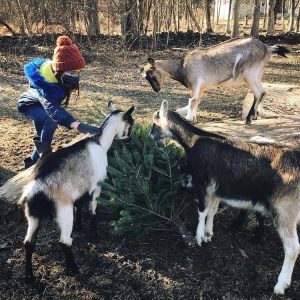 Looking for a wintertime family outing in Central NJ? Click on image to visit Gorgeous Goat in Stockton.

The dominance of females was dramatically illustrated a few years ago when an intruding female eagle visited the nest at Bordentown, killed the resident female, and took her place with the same male. Call her Lizzie Bordentown, the eagle with a fatal attraction! Perhaps it was behavior of this kind that caused Delaware Valley resident Ben Franklin to advocate against the Bald Eagle as our national symbol for the birds’ “bad moral character.”

New Jerseyans are not making a moral judgment about our bald eagles. Most of us are delighted they have returned in large numbers to the Garden State, and particularly to Central Jersey. Credit the creation of the Environmental Protection Agency in the 1970s, the Endangered Species Act, and the small army of volunteers who adopt and monitor the known nests here in New Jersey. Occasionally, the volunteers have been able to save young eagles who have fallen from their nests, or whose nest has been destroyed in a storm.

Thanks to so much work over half a century, every New Jerseyan has a chance to see an eagle soar. 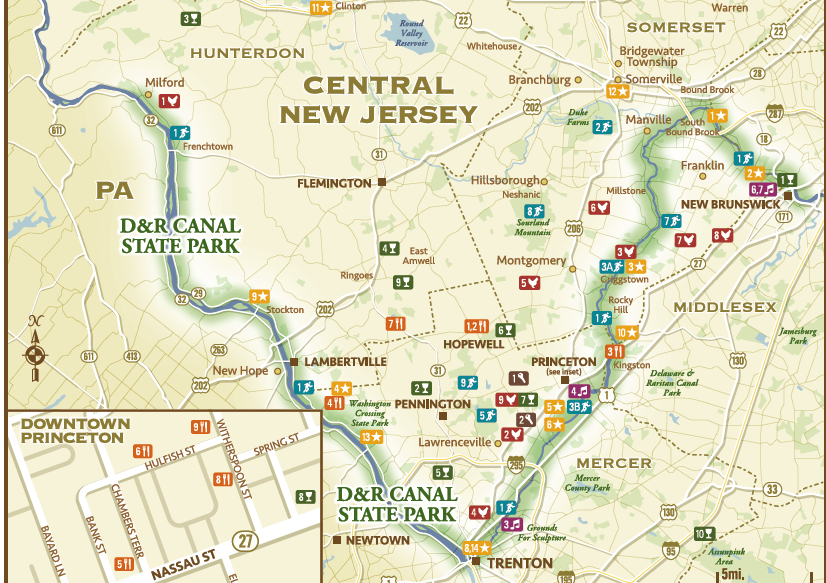 Click on the map to Discover Central Jersey farms, vineyards, and historic sites.